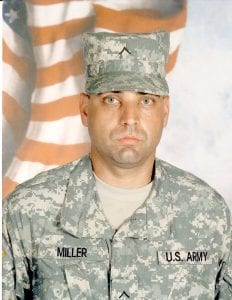 Fairlea-Kenneth Thomas “Kenny” Miller, 45, passed away Saturday, Nov. 16, 2019, at his home after an extended battle with cancer.

Born Mar. 13, 1974, in Ronceverte, he was the son of Larry T. Miller and the late Margaret Ann Miller Brown.

Kenny is survived by his wife of 20 years, Christina Miller who also served as his full time caregiver during his battle with cancer. Kenny also left behind two step-children, Brent McClung, and Ashely Cornelious and husband John. He never saw them as step-children, he loved them as though they were his own. Kenny is also survived by his father, Larry T. Miller; sister; Pamela Rasnick and husband Keith Rasnick; niece, Presley Rasnick, and nephew, Parker Rasnick (Parker being uncle Kenny’s biggest fan) and two very special brothers-in-law, John and Michael Anderson.

Kenny worked as a CNA at the Greenbrier Manor in Fairlea for 17 years during which time he also cared for a special friend, Richard Ford, Sr. He loved his job and every resident under his care missing only a handful of days in the entirety of his career. Kenny was a fun-loving caring man, all who knew him knew they had a true friend. We may never know how many lives his life touched.

At Kenny’s request his body was donated to the West Virginia School of Osteopathic Medicine for the advancement of science. A memorial service will be held at the National Guard Armory in Maxwelton on Dec. 14, at 11 a.m. with full military honors. All who knew Kenny are asked to come and celebrate Kenny’s life. Armory address: 635 Industrial Park Road, Maxwelton, WV 24957.